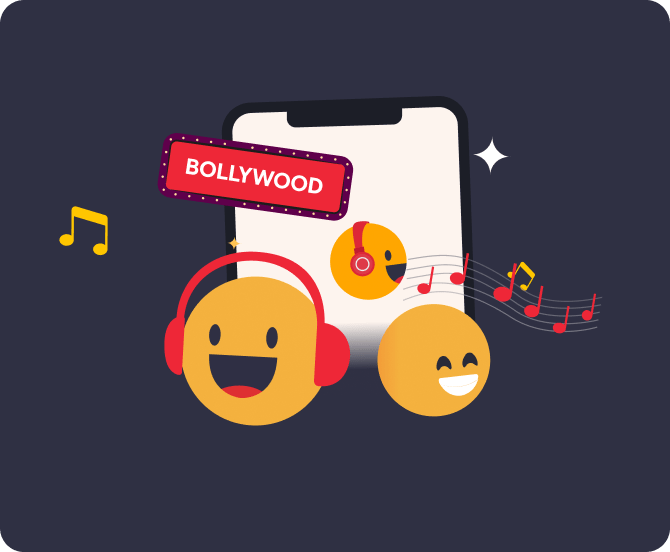 The name Bollywood and music go hand in hand. Whether it is Dance or romance Bollywood has a song for every theme, the Indian film industry is widely known for its soulful lyrics and melodious music. The magic of songs starts even before a movie is released, and if a song goes hit it makes the movie popular.

The magic of Bollywood would not be there without the singers who have given their soulful voices to the characters on the screen, and these legendary singers and their evergreen songs live on.

The love of music and the voices behind them has been central to our life. Whether hanging out with friends or chilling alone at home, we have a playlist for every occasion. Vi brings the magic of music and Bollywood in particular to its subscribers, in collaboration with the popular music platform Hungama music, the service is launched on the Vi App which lets you enjoy ad-free music on the go.

Music lovers can enjoy their most beloved artists with endless playlists, in HD quality, and without any Ads, the users can avail 6 months of premium subscription without any cost on the Vi app.

These playlists have been curated for the top Bollywood singers who convey emotions beautifully through their heartfelt singing. Take time to listen to all the best singers and explore their playlists for every mood on Hungama music in the Vi App.

Although all these seasoned singers have been giving many hits to the Hindi film industry there are innumerable other talented newcomers who are here to rule the hearts. Some of the eminent new singers in Hindi Cinema are Jubin Nautiyal, Palak Muchhal, Amitabh Bhattacharya, Jasleen Kaur Royal, Sachet Tandon, Asees Kaur, Tulsi Kumar, Badshah, Guru Randhawa, Dhvani Bhanushali, and many others.

This list would be incomplete without the mention of the legendary AR Rahman who composes, produces, and sings many of the super hit songs in Bollywood and works with all these top singers. But to elaborate on his talents would require a whole new blog! So that’s for another day.